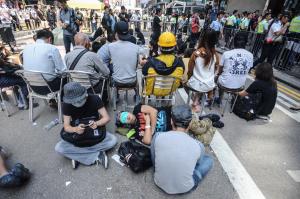 Hong Kong’s embattled government said it will open talks with student protesters Tuesday, after three nights of clashes between police and demonstrators who have staged huge pro-democracy rallies for nearly three weeks.

The city’s leader Leung Chun-ying made a dramatic U-turn Thursday as he announced a resumption of talks with the Hong Kong Federation of Students (HKFS), one of the groups leading the protests, after abruptly pulling out of discussions a week earlier.

“Right now we are planning that it will take place on the afternoon of Tuesday, October 21,” Leung’s deputy Carrie Lam told reporters Saturday.

Lam said the talks would be focused on constitutional reform.

There was no immediate response from protesters, who have held sit-ins at three major intersections causing significant disruption to a city usually known for its stability.

Demonstrators are calling for Beijing to grant the former British colony full democracy and for Leung to resign.

Beijing insists that candidates for the 2017 vote must be vetted by a loyalist committee — and Leung warned that China’s Communist authorities have no intention of backing down.