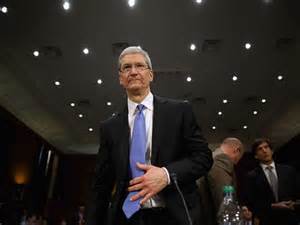 An Apple spokesperson did not immediately respond to a request for comment on the meeting.

Cook is a frequent visitor to China, where the iPhone 6 was launched last week and where the US tech giant’s products enjoy a devoted following.

During a trip to Shanghai last January, Cook said he expects China to surpass the United States to become Apple’s largest market.

Cook’s latest visit comes days after the anti-censorship group GreatFire.org claimed that Chinese authorities had launched a “man-in-the-middle” attack interfering with the iCloud service to try to obtain information from Chinese users.

“This is clearly a malicious attack on Apple in an effort to gain access to usernames and passwords and consequently all data stored on iCloud such as iMessages, photos, contacts, etc.,” the group said, adding that the move appeared to coincide with the iPhone launch.

On Tuesday Apple acknowledged the hacking attempts but made no mention of China.

The news comes just weeks after a widely publicised incident which allowed hackers to access and post nude pictures of celebrities including Jennifer Lawrence from their iCloud accounts.

Apple maintained that some celebrity accounts were compromised in a “targeted attack” to gain passwords, but that it found no breach of iCloud or other Apple systems.

Cook’s visit to China comes days after Facebook co-founder Mark Zuckerberg — whose site is banned in China along with other popular social media platforms including Twitter and Instagram — was appointed to the advisory board of Tsinghua University’s School of Economics and Management (SEM) in Beijing.

China’s Communist authorities maintain a tight grip on public expression, but Facebook officials have made frequent trips to Beijing in recent years, driving speculation that the world’s largest social network may yet be eyeing a way into the market.

Disappointed Venezuelans lose patience with Guaido as Maduro hangs on

Those responsible for Myanmar crimes could face genocide charges