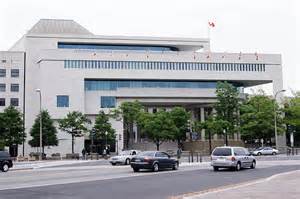 Canadian embassy in Washington in on lockdown as a precaution after a gunman shot and killed a soldier at a war memorial in Ottawa, CNN reported Wednesday.

The US Embassy in Ottawa is also on temporary lockdown due to the shootings.
On Wednesday morning, a soldier who was standing guard at the National War Memorial in Ottawa was shot by an unidentified gunman. Shortly after, shots were fired at the Canadian Parliament which is located nearby.
A wide-scale security sweep of the downtown area is underway in Ottawa as police has reasons to believe that at least one more suspect was involved in the shootings, the Royal Canadian Mounted Police said at a news briefing Wednesday.
Ottawa police have advised residents to avoid going to the shooting sites and to «stay away from windows and off roofs» in downtown Ottawa.

Rwanda re-opens border with Uganda to trucks for 12 days

Public, election officials may be kept in the dark on hacks

Netflix’s top spokesman fired over use of racial term