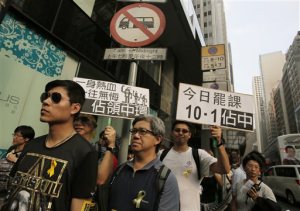 Hong Kong democracy activists on Tuesday marked one month of mass protests, calling on supporters to gather for an evening rally wearing the masks they have used to ward off police tear gas and pepper spray.

Organisers striving to inject new momentum into the movement told crowds to gather at the main protest camp opposite the city’s government headquarters for commemorations starting with an 87-second silence at 5:57 pm (0957 GMT).

At that time on September 28, riot police shot 87 volleys of tear gas at crowds of largely peaceful protesters who had taken over a highway near the city parliament.

That decision backfired, drawing tens of thousands of sympathisers onto the streets and kickstarting a movement that has become the most concerted challenge to Beijing since the bloody 1989 Tiananmen protests.

Demonstrators are calling on Beijing to rescind its insistence that candidates standing to be the city’s leader in 2017 must be vetted by a loyalist committee — an arrangement demonstrators deride as “fake democracy”.

But the Chinese government shows no sign of backing down and protest leaders are unsure of how to achieve their goals.

Occupy Central, one of the main protest groups, called on supporters to don the same protective masks and goggles they wore to defend themselves when the street rallies descended into chaotic confrontations.

The protests have been dubbed the “Umbrella Movement” following the creative ways demonstrators used them to shelter from the heat, torrential rain, pepper spray and police batons.

A Facebook group has called on supporters to open umbrellas en masse at 6 pm to “express our disappointment and outrage” over police heavy-handedness and the lack of political progress. Nearly 10,000 people have so far pledged to take part.

Hu Jia, a prominent Chinese dissident on the mainland currently under house arrest, said he would unfurl his own umbrella in solidarity with Hong Kong.

“I will participate in this event. In my home prison in Beijing,” he told AFP.

Now into their fifth week, the protests are at something of an impasse.

Student leaders held talks with government negotiators a week ago but made little headway, while a planned poll to gauge the movement’s response to the government was shelved on Sunday.

At the same time, the movement’s leaders are aware the disruption caused by their roadblocks has caused mounting frustration among some Hong Kongers.

In a sign of the strains, Occupy’s co-founder and university professor Benny Tai said Tuesday he planned to spend more time away from protest sites and return to teaching, but insisted it was not a retreat.

“It’s not that we will leave the movement,” he told reporters. “On the other hand, for the movement to continue, we need to make adjustments to our daily lives so that our psychological status and physical strength can support it.”

The city’s Beijing-backed leader Leung Chun-ying has seen his popularity nosedive during the crisis.

A new poll by the Chinese University of Hong Kong showed Leung now scores 38.6 on an approval scale among voters which runs from 0 to 100 — his lowest since taking office in March 2012 when his score was 53.9.

Leung caused anger last week when he said that open elections were not feasible because they would result in the city’s poor dominating politics.

Under Beijing’s plan, the 1,200-strong committee which will vet the city’s next leader will be similar to the one that voted for Leung, which was made up of representatives from professional classes and special interest groups.

Leung made more waves on Sunday by saying some of those groups — specifically from the sport and religious sectors — “do not contribute to the economy”.

Leung apologised Tuesday for causing “misunderstandings and concern” with his comments but said he remained committed to Beijing’s vetting procedure.

“What I meant was that we have to pay attention to every sector. This means we should not lean towards any sector or class because of its size or its contribution to the economy,” he said.

Newcastle’s Colback out for six weeks with knee injury