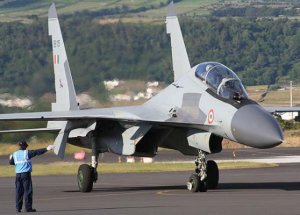 “The fleet has been grounded and is undergoing technical checks following the latest accident in Pune. It would be back in air only after a thorough check,” Wing Commander Simranpal Singh Birdi said.
The fleet of about 200 Su-30 jets currently grounded represents almost a third of the country’s fighter fleet. The IAF is due to purchase another 72 of the aircraft from Russia.
An IAF Sukhoi-30 MKI crashed into a field in the Pune district in the western Indian state of Maharashtra on Tuesday. There were no casualties as both the pilot and the co-pilot had ejected to safety.
The Su-30 MKI, NATO reporting name Flanker-H, is the IAF’s elite fighter-bomber. It was developed by Russia’s Sukhoi Aviation Corporation and built under license by India’s Hindustan Aeronautics.

Turkish Central Bank reserves drop to $114.6B in Feb.