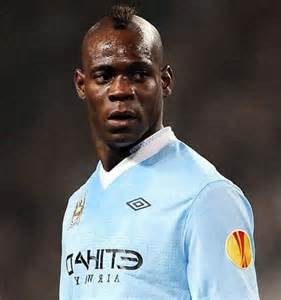 (AP) — A halftime swap of shirts with a Real Madrid player provided the first flashpoint in Mario Balotelli’s career at Liverpool.

In truth, it should be the least of the team’s worries.

What should be of more concern are ineffective displays by the Italy striker that are causing restlessness among fans and increasing dismay among teammates.

Spoilt by a weekly glut of goals from Luis Suarez last season, Liverpool fans are feeling short-changed by the Uruguayan’s replacement. The bare statistics show Balotelli has one goal in 10 games, but it is his all-round contribution that has been more disappointing.

And patience is starting to wear thin at Anfield.

The 3-0 loss to Madrid in the Champions League on Wednesday wasn’t simply a chastening night for Liverpool on the biggest stage in European football. It was the low point in Balotelli’s two months at the club.

Not only was he substituted at halftime after having just 23 touches of the ball, he incurred the wrath of supporters by swapping shirts with Madrid defender Pepe on their way to the dressing room, moments after the first half ended. The exchange was played out on the edge of the pitch, just before Pepe and Balotelli dipped out of view down the steps to the tunnel.

Fans nearby failed to hide their disgust for a ritual that seems to be accepted on the continent but not in England. Madrid coach Carlo Ancelotti shrugged his shoulders when asked about it after the match, saying: “I don’t see a problem.”

Liverpool manager Brendan Rodgers was angered, though, and said he would be reprimanding Balotelli on Thursday. “It’s not something I stand for,” said Rodgers, who was unhappy when his defender Mamadou Sakho swapped shirts with Samuel Eto’o at halftime against Chelsea last season.

Yet, it was something else Rodgers said that was more telling, and revealed that even he may be beginning to despair of Balotelli’s output.

Explaining why Balotelli was replaced at halftime for Adam Lallana, Rodgers said: “I felt we needed a bit more movement centrally to occupy their centre halves a bit more . Adam Lallana came on and was tireless in his work rate. That is the minimum here at Liverpool.”

What can be seen as a thinly veiled swipe at Balotelli came from a manager who has continually stressed the need for the striker to work hard.

After former Liverpool midfielder Jimmy Case called Balotelli a “waste of space” and “just not a team player” following another unconvincing display at Queens Park Rangers on Sunday, Rodgers stuck up for the Italian by saying: “It will drop for the boy. The most important thing for me is his work rate.”

That is being called into question now — and Balotelli cannot offer goals as a retort.

With Suarez and Daniel Sturridge dovetailing so well and scoring 52 goals between them, Liverpool boasted one of the most potent strikeforces in Europe last season. It also made the team one of the most attractive to watch. Liverpool fans used to respond to the pair’s relentless harrying of opposition defenders, something the languid Balotelli is not accustomed to doing.

With Suarez gone, Sturridge currently injured, and Balotelli misfiring, the contrast to this season is acute.

Liverpool’s players are showing their unhappiness with Balotelli, too. Against QPR, Raheem Sterling and Lallana threw their hands up in disgust as Balotelli skewed a weak shot wide. Three days later against Madrid, there was more exasperation from Liverpool midfielders as Balotelli squandered a counterattack by having a speculative shot blocked.

“Most worrying thing is his teammates’ body language towards him,” former Liverpool striker Michael Owen tweeted on Wednesday. “Once you lose their respect it’s a big struggle.”

Rodgers’ 16 million-pound ($26.5 million) gamble on Balotelli isn’t working out but the manager’s options are limited. Sturridge potentially is three weeks away from a return and Rodgers appears to lack faith in Rickie Lambert, with the diminutive Sterling preferred up front in the second half against Madrid.

Rodgers got the best out of Suarez and Sturridge, who had turbulent pasts before arriving at Anfield.

Whether he can do the same with the free-spirited Balotelli remains to be seen.

Borsa Istanbul up at open

‘I’m trying to be nice’:Trump tells media to end ‘hostility’