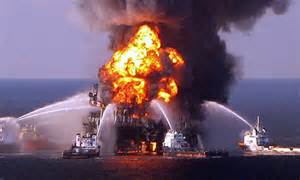 The cameras have left, but tears continue to fall in the Gulf of Mexico, four years after the environmental catastrophe caused by an explosion on British oil giant BP’s Deepwater Horizon rig.

In “The Great Invisible,” a documentary which won the Grand Jury prize at the South by Southwest (SXSW) festival in Texas, director Margaret Brown shines the spotlight back on the main victims of the disaster.

These include fishermen and oyster-farmers whose businesses were devastated by the tide of oil, as well as children from the US states of Louisiana, Texas and Alabama on the front line of the vast slick.

“I come from Alabama, this is very personal for me,” she told AFP in an interview.

A few days after the explosion on the Deepwater Horizon on April 20, 2010, her father sent her photos of their sea-front family home, with a beach plastered in crude oil.

Brown reacted instinctively, and immediately: she dropped the film project she was working on in South America and set about raising funds and bringing together a team to tell the oil spill story, in record time.

“The Great Invisible,” out this Friday in the United States, includes rare footage of two survivors of the explosion, including chief engineer Doug Brown, who shot never-before-seen video a few hours before the blast.

Today he remains disabled, and haunted by guilt for having worked for BP and been unable to prevent the catastrophe, on an oil rig which was supposed to have the latest technology for safe oil drilling.

Both of them are still waiting for full compensation payouts which they were promised in the wake of the disaster.

The British company refused to take part in the film, as did other oil giants including Chevron, ExxonMobil and Shell.

BP, found guilty of gross negligence and wilful misconduct while “motivated by profit” which blinded it to the safety risks, could face a fine of up to $18 billion, as well as having to pay into a $20 billion compensation fund.

More than 100,000 residents and businesses in Louisiana, Texas and Alabama received payouts, but hundreds of thousands of others were refused any compensation.

“The Great Invisible” notes that, four years after the worst oil spill in US history, legislation on deep-water drilling — which is at record levels, with some 3,500 active rigs — has not been strengthened by Congress.

And BP has apparently not learned from its mistakes. “It’s amazing what they do when they think no one’s looking. They have the worst safety record in the Gulf,” said the director.

“BP is all about PR (public relations) and perception. The minute the media is out, they don’t care. Now they are asking for some money back, from what they’ve paid,” she added.

One strength of the film is that it does not simply lambast BP. “I wanted to make a film that would be part of a conversation and inspire them to do something, because there are so many things you can do,” she said.

“The main thing is to start understanding how we are all connected to this big factory in the Gulf of Mexico,” she added.

At one point the documentary shows a conversation between oil company bosses in which they say the public should be grateful to the industry for producing gas at $2 a gallon.

Even the victims have to admit the dilemma. “This civilization wouldn’t last three hours without oil,” says a fisherman in the film.

China: 10 held for killing panda and selling its meat

U.N. climate talks run into overtime, but deal “in reach”

Mediator Pollack’s pragmatism gets Argentina and creditors to deal