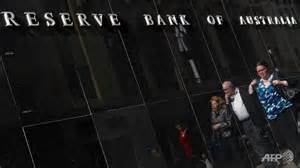 Australia’s central bank Tuesday kept interest rates at a record low 2.5 percent, maintaining an unchanged outlook for the country’s economy as it continued to call for a weaker currency.

The Reserve Bank of Australia has kept the cash rate steady since August 2013, and since February has flagged a “period of stability” in monetary policy as the economy transitions away from mining-led growth.

“In the board’s judgement, monetary policy is appropriately configured to foster sustainable growth in demand and inflation outcomes consistent with the target,” the RBA said in a statement following its monthly board meeting.

“On present indications, the most prudent course is likely to be a period of stability in interest rates.”

The Australian dollar, which was trading just below 87 US cents before the statement was released, edged up slightly to 87.30 US cents.

“The ‘period of stability’ has proven to be longer than they thought at the start of the year.

“While rates have been unchanged, the balance of rates around the outlook has moved towards weaker global outlook and certainly a lot less need to raise interest rates.”

The central bank strengthened its rhetoric against the local currency slightly, saying that the Australian dollar “remains above most estimates of its fundamental value, particularly given the further declines in key commodity prices in recent months”.

It said in October that the exchange rate remained “high by historical standards”.

While an unprecedented boom in mining investment has helped the economy avoid a recession for more than two decades, an expected sharp fall-off next year had seen the Reserve Bank maintain accommodative settings to stimulate growth in non-resources industries.

The Reserve Bank’s decision came as the Australian Bureau of Statistics revised up its September unemployment rate from 6.1 percent to 6.2 percent, the highest level in almost 12 years

U.S. Navy chief does not rule out sending aircraft carrier through Taiwan Strait

VAR to be used from Africa Cup of Nations quarter-finals