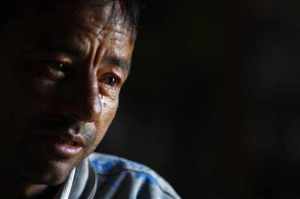 (AP) — Under crushing financial strain, Kumar Budathoki sold one of his kidneys to organ traffickers for $5,000, a sum he hoped would help set him up for a lifetime free of money problems.

Instead, he got a lifetime of health problems — and only a fraction of the money promised to him by a shady broker in Hokshe, a village of tiny farms and mud huts that has been the center of the illegal organ trade in Nepal for more than a decade.

Only about 4,000 people live here, yet at least 121 of them have sold their kidneys, said Krishna Pyari Nakarmi, who has been leading the campaign against the kidney trade in Hokshe. Those are only the cases she has been able to document, and she believes the number could be much higher. The scars are easily hidden under a shirt, and many villagers have moved away — possibly after going through the surgery.

Despite a recent clampdown on the trade, authorities warn that the promise of easy money could easily erase any gains made against the organ traffickers. And villagers who already sold their kidneys continue to suffer the health consequences.

“I sold my kidney because I wanted to buy some land to give my family a good life,” said Budathoki, 37, outside the two-story mud home where he lives with his mother, his wife and two teenage children.

“But now I have no job, deteriorating health and no future for my family,” he said.

The black market for human organs is believed to be flourishing around the world, with kidneys the most commonly trafficked organs because they can be harvested from live donors.

In Hokshe, traffickers have operated with surprising impunity. Nearly every resident seems to know someone who sold a kidney on the black market.

Dr. Rishi Kumar Kafle of the National Kidney Center in Katmandu said while there is illegal organ trafficking elsewhere in Nepal, he knows of no place where it has been as pervasive as it is in Hokshe. The reasons are unclear: It’s not the poorest area of Nepal, nor is it particularly convenient to medical facilities able to conduct transplants.

For more than a decade, traffickers openly stalked the village, high in the mountains outside Kathmandu, scouting for farmers and poor laborers to lure or dupe into giving up kidneys. Many residents are illiterate and were all too willing to go under the knife.

Over the years, the village earned the nickname “the kidney bank.”

The donors, promised hundreds or even thousands of dollars in a country where per capita income is only $700, would then cross the border into India for the surgery, with their organs destined for wealthy patients there.

Health complications seen in the village include leg pain, fatigue, high blood pressure and urinary problems. Even though a person can live normally with only one kidney, doctors say patients must look after their health carefully, follow a nutritious diet and drink alcohol only in moderation.

Many of the donors interviewed by The Associated Press in Hokshe said they could not afford enough healthy food if their crops fail. Others acknowledged drinking heavily or were clearly intoxicated during interviews. Many said they refuse to go see doctors because they are afraid authorities might find out that they have sold a kidney illegally, though only traffickers have been prosecuted so far.

Budathoki gave up his kidney nearly 15 years ago. He said the broker downplayed the risks of the surgery.

“The broker told me that I had two kidneys and I only needed one, the other one was a spare that was useless for me. Until then I didn’t even know what kidney was and why or how many I needed,” he said.

Once he got to India, Budathoki could not understand the doctors because they spoke to him in Tamil and Hindi. He speaks only Nepali.

“I never understood what the doctors and people in India were talking about so all I did was nod and sign papers,” Budathoki said.

The donors traveled to India because transplants generally were impossible in Nepal. Until 2008 the surgery was illegal; after that, only close relatives were allowed to donate, and even they had to pass through strict government screening.

“I was promised I would get the full amount after the surgery,” he said. “But I was already escorted back (to Nepal) before I could heal properly. I was too weak to argue or fight back and never saw the broker again.”

Budathoki is now unable to work long hours, carry heavy things or walk for very long. Even now, he said, the incision where a doctor removed the kidney still hurts.

Budathoki’s wife and younger brother are suffering, too. They sold kidneys after he did, but before the extent of his health problems became apparent.

His wife, Sabitri Ranabhat, is too weak to do farm work and now sells guava by the roadside. His younger brother, Kancha Budathoki, became unable to provide for his wife and daughter, and turned to alcohol after they left.

Budathoki’s neighbor, Mohan Sapkota, who also sold his kidney, travels nearly 50 kilometers (30 miles) to the capital, Kathmandu, every month to see a specialist for his legs, which constantly ache since he gave up a kidney in 1997.

“The doctor who examined me saw the kidney scar and scolded me,” he said. “He thinks all the pain is somehow related to my kidney surgery.”

Years of campaigning by social workers, along with more recent monitoring by police, have curbed trafficking significantly. Kedar Neupane, chief government administrator of Kavre district, said there have been no cases of kidney sales in 18 months.

Volunteers trek the web of foot trails in Hokshe, going door to door, talking to the residents about the risks of selling kidneys.

It is dangerous work. One volunteer, who asked to be identified by only one name, Radha, said traffickers threated to kill her and throw her body in a river if she continued to interfere with business.

But the campaign got results.

Police arrested 10 traffickers last year. Three of them — including Prem Bajgai, considered the kingpin of the trade, are in jail. The others are out on bail and awaiting trial.

But the temptation remains. Thousands of kidney patients in India — and even Nepal — are ready to offer big money for organs.

For nearly two years, Jit Bahadur Gurung, a 43-year-old employment agent, has been getting dialysis treatment at the National Kidney Center. He has to come in twice weekly for four hours at a time and pays about $360 a month for treatment.

He says he would consider buying a kidney illegally so he doesn’t have to spend thousands of dollars and wait years for a potential match through legal channels.

“I want a chance to live,” he said from his hospital bed. “If I can live 25 more years of healthy life, why not buy the organ?”

In Hong Kong, a protest boom for some businesses starts waning