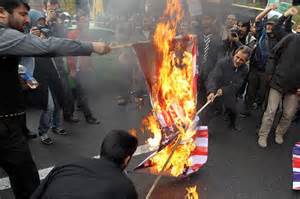 (AP) — Thousands of Iranians are chanting “Down with America” at a major anti-U.S. rally to mark the anniversary of the 1979 takeover of the U.S. Embassy in Tehran.

Tuesday’s rally in the Iranian capital puts more pressure on moderate President Hassan Rouhani, just a week ahead of a meeting between American and Iranian officials over Tehran’s controversial nuclear program.

The rally was organized by hard-liners and the demonstrators also chanted “Death to Israel” and “Death to Britain.”

In 1979, militant Iranian students who claimed the U.S. Embassy was a center of plots against the Persian nation held 52 Americans hostage for 444 days. Ties between the two countries were severed after the siege and formal relations have not been restored since.