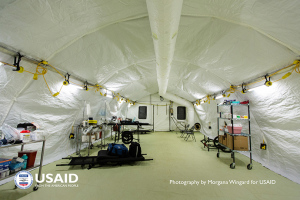 “I think this hospital has brought us some dignity; I remember seeing my colleagues lying there and dying among other patients a few months ago,” Victoria Boucher, a registered nurse, told The Anadolu Agency.

The new hospital, entirely dedicated to treating healthcare workers who have been infected with Ebola while carrying out their jobs, was built by the U.S. military outside capital Monrovia.

Boucher, who now works with Doctors without Borders, recalled her many colleagues who had died from Ebola at the height of the outbreak – a situation that led many health workers to abandon their assignments.

She said colleagues who were infected while treating Ebola patients had simply been put among other patients at various Ebola treatment units without receiving adequate attention.

Boucher cited the case of a former workmate, Esther Kesselle, who, she said, had contracted the virus in Liberia’s northwestern Montserrado County.

“Esther was the first to contract the virus in Montserrado,” she recalled. “To our outmost surprise, she was placed in the neonatal [ward] among children and babies because there was no place for health workers.”

“I think if we had a particular place [for treating health workers], they would not have died,” she said.

The new, 25-bed hospital was built by the U.S. military as part of efforts to support the Liberian government in its fight against Ebola.

In recent months, Ebola – a contagious disease for which there is no known treatment or cure – has killed roughly 5,420 people, mostly in West Africa, according to the World Health Organization.

At least 2,964 of these Ebola deaths were registered in Liberia alone.

Since the beginning of October, however, the country has seen a reduction in the number of fresh Ebola cases.

“One of our friends from the Good Way Clinic who came down with the virus was taken to the new hospital,” she said. “I have been told that he’s being well taken care of by the Americans.”

She cited the death of several colleagues due to what she described as a lack of “counseling and encouragement.”

“Most of our colleagues died because they felt they were nothing. They felt there was no hope for them,” she lamented.

“It is just the grace of God that has kept some of us alive. Going to work every day and knowing that you are going to Ebola patients, and seeing some of my friends die – it’s troubling, but we have to go and save lives,” he told AA.

He said healthcare workers had suffered too long due to the ongoing outbreak.

“I am not disputing the fact that healthcare workers who contracted the virus were not being cared for, but having an exclusive unit for us – this is a motivation for us,” he said.

Wannie Harris, a nurse at the Island Clinic Ebola Treatment Unit, hopes for the speedy recovery of all healthcare workers who have contracted the virus.

“My expectation for the [new] hospital is to see every healthcare worker that enters it come back and serve their people,” she said. “That is my prayer.”