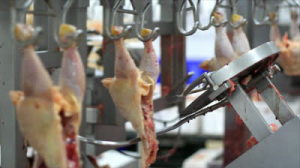 Which came first, the chicken or the eggs? For thieves in Puerto Rico this week, it was the eggs.

Days after police reported that thieves stole nearly half a million eggs from a north coast warehouse, authorities reported Saturday that someone stole 20,000 pounds (9,072 kilograms) of chicken.

The thieves made off with the poultry from a truck parked outside of a warehouse in the island’s central region.

Police said the chicken is worth $28,000. No one has been arrested.

The man who would be king, eventually: Prince Charles turns 70