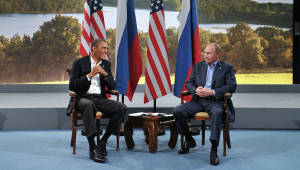 (AP) — Russian President Vladimir Putin has said in a New Year’s message to U.S. President Barack Obama that Moscow is looking for equality in bilateral relations next year.

The Kremlin on Wednesday published several dozen New Year’s messages addressed to heads of states and international organizations such as the Olympic Committee and FIFA.

Putin reminded Obama of the upcoming 70th anniversary of the allied victory in World War II and said that it should serve as a reminder of “the responsibility that Russia and the United States bear for maintaining peace and international stability.” Moscow is anxious for the relations to advance but only as long as there is “equality and mutual respect.”

Conspicuously absent from the list of the recipients of New Year’s messages was Ukrainian President Petro Poroshenko.

Netanyahu says Brazil committed to move embassy to Jerusalem in 2020

PM pick had library pass, no official status at NYU