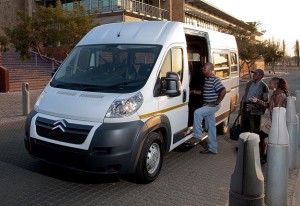 (AA) – Transport fares have risen in most bus and train stations in Johannesburg as many people rush to book tickets back to their hometowns for the upcoming holidays.

“We are now charging 800 rand [$80] from Johannesburg to Harare [the capital of Zimbabwe],” Eddie Rex, a driver for the Phadziri Bus Company, told The Anadolu Agency at Johannesburg’s New Town bus station.

Rex said business had been booming for the past week, with thousands of Zimbabwean nationals residing in South Africa starting to trickle back home.

“Before the holiday season began, only two buses from each company would load passengers from our terminus to Harare; but now each company sends about five buses daily,” he said from behind the wheel as he waited to take off.

There are a large number of migrant workers in Johannesburg, South Africa’s largest city, who normally travel back to their countries during the Christmas holiday season.

Sibanda Blessing was travelling to Beit Bridge, a border town between South Africa and Zimbabwe.

“I always budget ahead for these seasonal price hikes because I have to travel and enjoy the holidays with my family,” she told AA as she boarded the bus.

Ntate Molestani, a middle-aged Johannesburg resident, was seeing his wife off outside a Lesotho mini-bus taxi stand.

But the fares were also increased for domestic routes.

“Prices on some routes have increased by about 6 to 10 percent,” Bafana Magagula, a spokesman for the South African National Taxi Council, the country’s largest minibus taxi body, told AA.

He, however, could not give exact routes for which prices had increased or how much those fares were.

Long queues of people waited to book tickets or board buses at the station’s Johannesburg terminal.

“All buses to Cape Town are fully booked today,” a booking agent at the Translux bus office at the station told AA. “There will be tickets available on Tuesday.”

“We have been speaking to our passengers advising them not to enter vehicles that are already full,” said Magagula. “If a vehicle is full, a passenger should not board.”

A ticket booking clerk for the luxury Eagle Liner Bus Company said most long-route passenger vehicles would be grounded on Wednesday, as there would be no commuters traveling on Christmas Eve.

“We shall not have passengers until December 30, when some people will start returning to the city,” he told AA.

The usually busy Johannesburg traffic has also subsided, as most motorists have travelled out of the city for Christmas.

There has also been an increase in police patrols in most parts of the city to ensure that criminals don’t take advantage of the holidays to rob residents.

Voters weigh in on the turbulent Trump era