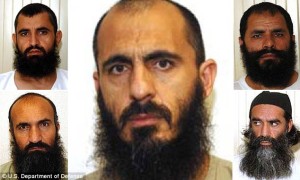 Five Guantanamo Bay detention facility detainees have been released for resettlement to Kazakhstan, the US Department of Defense (DoD) said late Tuesday.

“The United States coordinated with the Government of Kazakhstan to ensure these transfers took place consistent with appropriate security and humane treatment measures,” the statement published on the DoD website stated.
The resettlement of three Yemeni and two Tunisian nationals to the Central Asian republic follows the transfer of six detainees to Uruguay earlier in December. Last month, five prisoners were resettled in Slovakia and Georgia.
Following the latest transfer, the DoD says there are currently 127 prisoners remaining in the center. A total of 64 prisoners cleared for release are expected to be transferred in the next six months.
The detention camp, located on the island of Cuba, has been the subject of sharp criticism from human rights advocates, governments and media since its establishment in the wake of the September 11, 2001, terrorist attacks.
Its conditions have been regularly described as cruel and inhumane by health workers, inspectors and former detainees.
In 2009, Obama signed an order to shut down the camp.