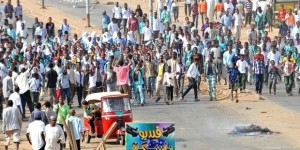 (AA) – One protester was killed Tuesday when Sudanese security forces moved to disperse an anti-government demonstration in the western Darfur region, eyewitnesses have said.

The protester had died instantly after he sustained a fatal gunshot to the head during clashes with security forces, eyewitnesses told The Anadolu Agency.

Sudanese forces had moved to block a hundreds-strong protest from reaching the headquarters of the provincial government in Nyala, Darfur’s largest city, according to the witnesses.

Three other protesters were reportedly injured with gunshots during the clashes.

Protesters had been angered by deteriorated security conditions after a shop owner was killed by gunmen a day earlier in the center of the city.

Home to some 7 million people, the lawless Darfur region in western Sudan remains a fertile ground for criminal gangs who routinely conduct killings, lootings and abductions of foreigners in exchange for ransoms.

Darfur has been the scene of a ferocious war between the Sudanese government and three rebel movements since 2003. The conflict has left 300,000 people dead and around 2.5 million others displaced, according to UN figures.

In 2009, the Darfur conflict prompted the International Criminal Court to issue an arrest warrant against Sudanese President Omar al-Bashir on a number of charges, including genocide allegedly committed by government forces and allied militias.