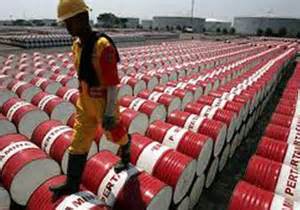 (AA) – The price of Brent crude oil dipped below $50 per barrel, its lowest point since April 2009, according to official figures.

Meanwhile, the American benchmark, West Texas Intermediate, WTI, dipped below the $50 per barrel mark late on Monday, its lowest point since April 2009, and trades around $47 per barrel on Wednesday morning.

Oil prices have declined more than 50 percent in the last six months, reaching their lowest point in the last five and a half years, and have seen the fastest fall since 2008.

The glut of oil supply and low global demand for oil are the main factors behind the slump of oil prices, while colder-than-anticipated winter conditions worsened the price fall.

As the slow growth rate of Asian and European economies keeps the global oil demand low, the U.S. domestic oil production boom since 2008 contributes to oversupply.

In addition, the rising value of the U.S. dollar, of which the oil prices are indexed to, hamper the purchasing power of oil-dependent countries to sustain their economies.

The Organization of the Petroleum Exporting Countries, OPEC, met on Nov. 27 to devise a strategy against falling oil prices, and decided against cutting production to increase prices.

The oil cartel’s most influential member and the world’s largest crude oil exporter, Saudi Arabia, lowered its official sale price of crude oil to Asia and the U.S., in order to preserve its market share and compete with the booming domestic oil production in the U.S.

While Saudi Arabia and Gulf countries can resist falling oil prices more than other producers because of their relatively lower break-even prices, producing nations, like Russia, whose revenues are dependent on oil exports are struggling to survive in the market.

Russian Deputy Prime Minister Arkady Dvorkovich announced on Dec. 25 that Russia may cut its oil production in 2015 due to low oil prices and lack of investment in its domestic energy sector.