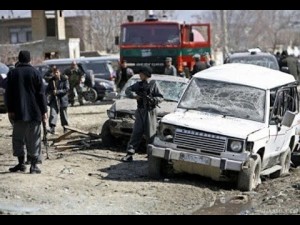 (AP) — A suicide car bomber struck near the headquarters of the European police training mission in Kabul on Monday, killing one Afghan civilian and wounding five others nearby, police and EUPOL said.

The Taliban claimed responsibility for the attack, the first against a foreign target in the Afghan capital in 2015.

According to a statement from the EUPOL mission, the driver of the car packed with explosives apparently targeted a convoy of mission vehicles near its headquarters on the eastern outskirts of Kabul in the early afternoon.

“The vehicle’s occupants were uninjured,” EUPOL said on its Facebook page. The mission funds and trains Afghanistan’s 157,000-strong police force.

The spokesman for the Kabul police chief, Hashmat Stanekzai confirmed the casualties.

Kabul was hit by a high number of attacks in the last weeks of 2014, as the Taliban targeted government, military and foreign installations. A total of six foreigners were killed in a flurry of attacks in the capital in late 2014.

Meanwhile, in southern Helmand province, an Afghan investigator said Monday that two soldiers had been arrested in connection with the deaths of at least 28 people at a wedding party on New Year’s Eve when artillery shells hit the house where they were celebrating.

Din Mohammad, part of a presidential delegation sent to Sangin district to investigate the incident, said that their probe had determined there was a heavy firefight with insurgents at the time.

The two soldiers will face unspecified charges, he said, adding that further investigations would determine whether they deliberately targeted the house.

The shells hit the house where a wedding party had gathered to welcome the bride. Along with the 28 killed, more than 50 people were wounded.

Afghan forces have taken over responsibility for nationwide security as of Jan. 1, following the drawdown of NATO and U.S. troops.

U.S. soldiers left Sangin, a major poppy-producing area along the Helmand River six months ago. Since then, Taliban attacks have increasingly been testing the ability of the Afghan army.

BP’s profits surge as it leaves downturn behind