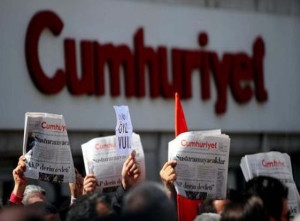 A pro-secular Turkish newspaper says police stopped trucks as they left its printing center to check the paper’s content after it decided to print a selection of Charlie Hebdo caricatures.

Cumhuriyet newspaper says police allowed distribution of the newspaper to proceed on Wednesday after verifying that the satirical French newspaper’s controversial cover featuring the Prophet Muhammad was not published.

The paper printed a four-page selection of cartoons and articles on Wednesday in a show of solidarity with Charlie hebdo but omitted religiously sensitive cartoons.

Police intensified security outside Cumhuriyet’s headquarter and printing center as a precaution.

The state-run Anadolu Agency said a few pro-Islamic students staged a protest outside the paper’s office in Ankara denouncing its decision to print Charlie Hebdo cartoons.

Pope: Don’t be misled by making money and career your life