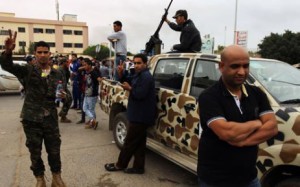 For over two months, Libyan troops loyal to the Tobruk-based government have been laying siege to Darnah, a stronghold for several militias including ones which had sworn allegiance to the Islamic State of Iraq and the Levant (ISIL) militant group.

Libya has been dogged by political instability since the 2011 ouster and death of long-ruling strongman Muammar Gaddafi.

The sharp political divisions have yielded two rival seats of government, each of which has its own institutions in Tripoli and Tobruk respectively.

From U.S. suburbs, ‘friends of Modi’ set to blitz India with calls in re-election...

Security forces lock down Beirut ahead of meeting, protest