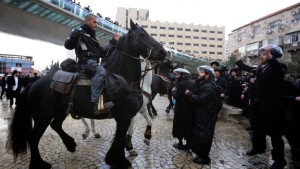 (AA) – Israeli police have arrested 48 ultra-Orthodox Jews who took part in protests against their conscription by the Israeli army, a police spokesperson said Monday.

Police spokesperson Luba Sarmri said that hundreds had staged demonstrations in West Jerusalem and Ashdod against the conscription of ultra-Orthodox Jews by the army.

Protesters blocked several streets in West Jerusalem, prompting police to intervene to clear the roads and reopen them to traffic.

Most of the arrests, she said, had come after protesters failed to obtain permits for the rally.

Under Israeli law, all Israelis above 18 years of age must perform military service unless specifically exempted by the Defense Ministry.

Ultra-Orthodox Jews had been exempt from army service until last year, when the Knesset (Israel’s parliament) passed a law revoking the exemption.