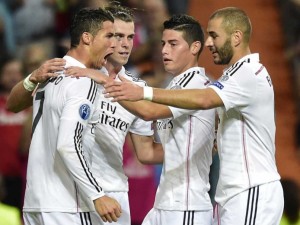 Home team Real Madrid took the lead in the match through their Colombian attacking midfielder James Rodriguez’s header in the 12th minute.

They then doubled the score when their forward, Jese, found the net in the 36th minute

Despite late Sevilla hopes for an equalizer, Real Madrid secured their lead and won the match 2-1.

Real Madrid regulars Sergio Ramos and James Rodriguez were subbed out due to injury problems in the first half. Both players are doubtful for the Madrid derby against Atletico Madrid on the weekend.

After the match against Sevilla, league leaders Real Madrid raised their points to 54 and are now four points ahead of their closest rivals Barcelona.

Atletico Madrid are third place in the league and seven points behind Real Madrid.

On Saturday, Real Madrid will play away to city rivals Atletico Madrid in a league match at Vicente Calderon Stadium.

Real Madrid’s Portuguese star Cristiano Ronaldo will be back for the derby as he completed his two-match suspension. His teammate Brazilian left-back Marcelo is still suspended for the clash against Atletico Madrid since he collected his fifth yellow card in La Liga.

– Standings in La Liga are as follows:

IS launches overnight attack against Iraqi troops in Mosul