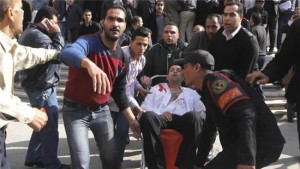 (AA) – Two Egyptians, including a policeman, were killed in a Thursday bomb blast in western Cairo, a Health Ministry spokesman has said.

“An explosive device went off in the Bolak al-Dakror district on Thursday,” Hossam Abdel-Ghaffar told The Anadolu Agency.

He said two people – a policeman and a civilian – had been killed in the blast.

There has been no claim of responsibility.

Bombings have become commonplace in Egypt since Mohamed Morsi – Egypt’s first democratically elected president – was ousted by the army in mid-2013.

While the government accuses Morsi’s Muslim Brotherhood of carrying out the attacks, the group emphatically denies the allegations, saying it is committed to purely peaceful methods of protest.

Some Thanksgiving menus: Turkey, with a side of impeachment

Three Suspected IS Militants Arrested After Their Return to Malaysia