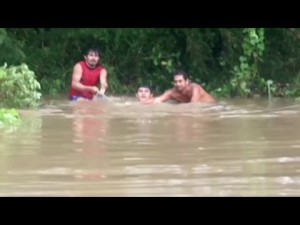 Rain and hail the size of baseballs have fallen since Thursday afternoon, inundating hundreds of houses in the central highlands of Veracruz, a state on the Atlantic coast of Mexico.

According to the state’s civil protection ministry, three women and three man have died, mostly in vehicles carried by raging waters. One victim has not yet been formally identified.

Enrique Alarcon Bonilla, the deputy mayor of Atzalan, was rescued after water carried the cab car he was driving. His wife and daughter who were also in the car, were not saved, he said.

The rivers in eight municipalities in the state continue to breach their banks. The most affected municipalities are Ixtacozquitlan, Huatusco, Orizaba, Córdoba, Omealca, Yanga and Cuitlahuac.

Three temporary shelters have been opened and have so far received 80 victims whose homes were flooded or damage by hailstones.

Salah: the Champions League final is not me against Ronaldo

A State Dept with swagger? Trump seeks reset with Pompeo