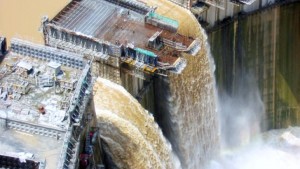 (AA) – Leaders of Sudan, Egypt and Ethiopia on Monday signed a declaration of principles on Ethiopia’s mega-dam on the Nile River, which Egypt had feared could substantially harm its share of water.

Egyptian President Abdel-Fattah al-Sisi, Ethiopian Prime Minister Hailemariam Desalegn and Sudanese President Omar al-Bashir signed the declaration in Khartoum, under which the three countries asserted their commitment to cooperation and to serve the interests of the three nations.

Speaking on the occasion, Desalegn reassured Egyptians that construction of the dam would not harm their country, reaffirming his country’s commitment to preserving the interests of the three countries.

For his part, al-Sisi said the deal was a framework agreement that the three countries would build on, asserting that Egypt was committed to cooperation with Ethiopia and Sudan for the development of the three nations.

He also voiced his keenness on working with Addis Ababa and Khartoum towards “translating the agreement into tangible results.”

“We in Egypt have no reservation on Ethiopian development,” al-Sisi told the audience, which included African leaders, Arab diplomats and officials from the three nations.

“We wish Ethiopia all the best,” he added.

Yet, the Egyptian leader said, the increasing water needs of Egypt, where there is little rain, should be addressed as well.

“We are starting a new era of cooperation, love and trust,” al-Sisi said in impromptu remarks after reading his speech.

“We are confident that Ethiopia and Sudan are interested in cooperation,” he went on to say.

“We are committed to reaching detailed agreements” to finalize all issues related to the dam, the Sudanese leader said.

The deal signing will precede a landmark visit to Ethiopia by al-Sisi, his first ever to the Horn of Africa nation since he assumed office last year.

The Egyptian leader is also expected to address the Ethiopian parliament on Tuesday.

It is also expected that a technical committee will name the winner out of four consulting firms bidding to undertake two studies of the Ethiopian dam, as recommended in 2011 by an international panel of experts.

The two studies recommended are a hydrological simulation model and a trans-boundary economic, social and environmental impact assessment.

Ethiopia’s Grand Renaissance Dam has been at the center of a diplomatic row between Cairo and Addis Ababa for several months.

While Ethiopia views the dam as a prerequisite for economic development, Egypt fears the project will lead to a marked reduction in its supply of Nile water.

Relations, however, between the two countries have improved since al-Sisi and Desalegn met at an African summit in Equatorial Guinea last summer.

GOP dismiss suggestion that State of Union be postponed