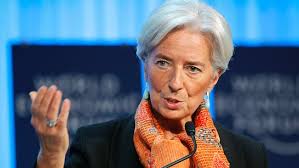 (AA) – The head of the IMF said Wednesday that the organization approved a $17.5 billion aid package for Ukraine, but the crisis in the country remains one of the world’s most significant geopolitical risks.

Christine Lagarde made the announcement based on Ukraine’s comprehensive economic reform program, which the fund has supported.

“This will provide additional financing for four years and hopefully help that country restore its situation, provided that stability can be maintained thanks to the cease-fire and Minsk agreement that was negotiated with great skills by leaders including Chancellor Merkel,” Lagarde said of the German Chancellor.

She said that the plan foresees disbursing approximately $10 billion worth of financing during the first year.

“What I can assure you is that Ukraine has satisfied all the prior actions that were expected and required of it in order to start running the program,” she stressed.

In Washington, White House press secretary Josh Earnest welcomed the package. The funding “underscores both the commitment of the Ukrainian government and central bank to take the steps needed to lay a foundation for robust growth, and the commitment of the international community to provide financing to help stabilize Ukraine’s economy as it implements these reforms,” he said in a statement.

Russia’s annexation of Crimea in 2014 and the ongoing conflict between government forces and pro-Russian separatists in eastern Ukraine has badly hit the Ukrainian economy.

More than 6,000 victims have lost their lives in the conflict between Ukrainian forces and pro-Russian separatists since last April, according to the UN.

A cease-fire was signed between Ukrainian forces and pro-Russian separatists in Minsk, Belarus, on Feb. 12.

The accord includes the withdrawal of heavy weaponry from combat areas, the withdrawal of all foreign-armed formations and the release of all hostages and unlawfully detained persons, as well as political reforms and decentralization in the eastern Ukrainian regions.