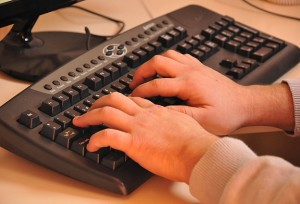 (AA) – The layout of the common keyboard is no a laughing matter in Turkey. For years, there have been disputes between two rival keyboards – the FGĞIOD or “F-keyboard” and the QWERTY or “Q-keyboard” – over which is the fastest to use.

That war has been dragged into the nationalist sphere as well; a Turk would know that an F-keyboard is a Turkish one while the Q-keyboard is a Western-style interloper.

As if the struggle between F and Q-keyboards was not enough, a new addition into an already-messy scene has re-started hostilities over a common typeset: the “E-keyboard.”

The F-keyboard was developed in 1955 by Ihsan Yener, an inventor and a graduate in Business Administration from New York University. It contains special Turkish letters like Ü and Ç and has nothing in common with the QWERTY or Q layout, which is the most internationalized keyboard.

Inventor of the E keyboard, Assistant Professor Mahmut Eksioglu from Istanbul’s prestigious Bogazici University, claimed last Tuesday that the new invention was developed by studying the ergonomic formation of letters and so is more optimal.

He claims that writing performance rises with the E-keyboard, and that it provides healthier and comfortable usage.

However, the 90-year-old father of the classic F-keyboard remains unconvinced.

“I believe that professor has no idea of a keyboard. Istanbul Technical University studied this matter years ago and found out that F-keyboard is the best,” he insists.

When asked why Turkish people still clearly prefer the Q-keyboard, Yener quickly snaps: “It is like a smoking addiction. You know it is harmful but cannot give up.”

Yener claims that international rapid-typing contests organized by Intersteno – a body for information and communication processing – have proved the worth of his F-keyboards.

For example, Yener says Turkish participants in the competition in five areas came in first place last year. He called on E-keyboard enthusiasts to enter the competition to prove the effectiveness of their new-fangled design.

“Frequently-used letters in Turkish have been put into easier places to reach. That increases your speed to type,” Simsek says in a video on keyboards.

Seckin Kose, Turkey’s chairman of Intersteno, dealt another blow to the E-keyboard by claiming that its layout is not scientific: “There is no logic behind E-keyboard. They split letters randomly.”

Nevertheless, Eksioglu says that research on his design was carried out with participants of different ages, and that the ergonomic criterion was determined by experimental studies. However, even he acknowledges that the F-keyboard is still better than the Q-keyboard when writing in Turkish.

The F-keyboard is a product of years-long investigation, its inventor claims: “I studied the etymology of Turkish words and established the layout in accordance with that study. The Turkish Standards Institution approved that set in 1955,” Yener says.

In 1963, Turkey took a further step and added a clause into its customs law, forcing companies to import typewriters with F-keyboards only. Until 1983, that law strengthened the dominance of the F-layout in the country.

Nevertheless, the introduction of personal computers with Q-keyboards into the Turkish market has weakened F-dominance over typeset and gradually made it a thing of past.

“In 1963, we were not aware of computers. If so, we would have written the law accordingly,” Yener says.

In the 1980s, the then prime minister, Turgut Ozal, added special Turkish diacritic letters such as Ğ and Ü onto the Q-keyboard thus making it “Turkish”, Seckin Kose claims. That attitude solidified status of Q-keyboard.

In 2013, a long-forgotten war re-surfaced. The Turkish Prime Ministry issued a memorandum that necessitated use of the F-keyboard in all public institutions. Also, it obliged only F-keyboard procurement and the re-configuration of Q-keyboards.

After this memorandum, some public institutions introduced lessons on the F-keyboard to re-popularize its use among citizens. Yener and Kose have asked for more from the Turkish authorities – such as introducing a class on F-keyboard use at elementary schools.

The war over keyboards will not end anytime soon. Although the Q-keyboard seems to remain popular among Turkish people, F-keyboard will dramatically increase its appeal with backing from public institutions.

North Korea boasts of ‘shaking the world’ by testing missiles that can strike U.S.