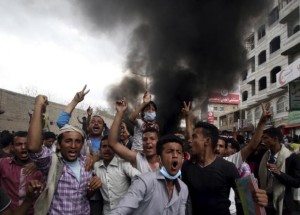 (AA) – Saudi Arabia’s highest religious authority has given its blessing to a Riyadh-led military offensive against the Shiite Houthi militant group, which has recently taken over parts of neighboring Yemen.

“The decision by the kingdom and its allies to launch a military operation in neighboring Yemen was a wise one,” Saudi Arabia’s Council of Senior Scholars said in a Thursday statement broadcast by Saudi’s official news agency.

“The operation seeks to defend Yemen’s legitimate government and the people of Yemen, whose country has been sabotaged by Houthi militias backed by certain regional forces seeking to destabilize Arab states,” the statement read.

Saudi scholars went on to urge Muslims around the world to support the offensive, which, it said, was aimed at “preventing Yemen from becoming a tool in the hands of malicious foreign forces.”

Several Arab states, all of them allies of Washington, have joined a Saudi-led military offensive against Yemen’s Houthi group, which was launched late Wednesday.

Predominantly-Sunni Saudi Arabia said the strikes were in response to calls by embattled Yemeni President Abd Rabbuh Mansour Hadi for military intervention in Yemen to “save the people from the Houthi militias.”

Fractious Yemen has descended into violence since last September, when the Houthis overran capital Sanaa, from which they have sought to extend their influence to other parts of the country.

Some Gulf countries suspect that the Houthi insurgency is supported by Shiite Iran.

Conte says he expects Chelsea to ‘suffer’ against Barcelona

Germany calls on Russia to respect “unity” of Ukraine after vote