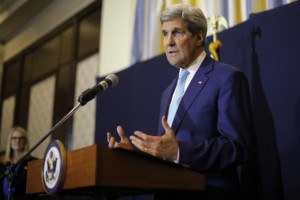 (AA) – Secretary of State John Kerry said Thursday that the U.S. is “deeply disturbed” by the alleged chlorine attack in northern Syria earlier this week by the Syrian regime.

“While we cannot yet confirm details, if true, this would be only the latest tragic example of the (Bashar) Assad regime’s atrocities against the Syrian people, which the entire international community must condemn.” Kerry said in press release.

At least six people, including three children, were killed late Monday in an alleged chlorine bomb attack on the northwestern Syrian province of Idlib, a Syrian opposition coalition was reported.

According to the Syrian Revolution General Commission’s statement released Tuesday, the regime airstrikes targeted the opposition-controlled villages of Sermin and Qminas. Hospitals in the area were reportedly overwhelmed with dozens of patients.

The coalition described the attack as a “massacre” and feared the death toll may rise because of the lack of adequate medical aid in the area.

“(The) regime continues to flout international standards and norms, including, if these latest allegations are verified, the Chemical Weapons Convention,” Kerry said.

The international community “cannot turn a blind eye to such barbarism,” he added.

Russian prime minister warns US against ramping up sanctions