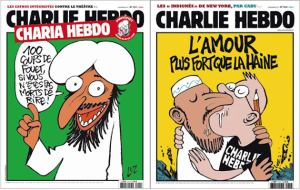 (AA) – People are being categorized either as Charlie or terrorist in the aftermath of the Charlie Hebdo attacks in France, a French cartoonist has said.

“The environment after the Charlie Hebdo attacks is just like post-Sept. 11. You are either Charlie, or a terrorist,” Zeon said in an interview with The Anadolu Agency. After the 2001 terrorist attacks in the U.S., the then President George Bush had infamously drawn the red line as “either you are with us or you are with the terrorists” at the start of his so-called war on terror campaign.

The Jewish cartoonist was arrested early March and sent to court in Paris for his alleged “anti-Zionist” drawings, in particular for a cartoon he made in 2011 that depicted a Palestinian child being stabbed by an Israeli-flag shaped knife. His arrest followed a complaint that was reportedly filed by the International League Against Racism and Anti-Semitism.

He alleged that his arrest was ignored by the mainstream French media since talking about his case would demonstrate “the contrast of my situation” after the Jan. 7 attacks on the French satirical magazine known for printing controversial material, including derogatory cartoons of Prophet Muhammad in 2006 and 2012.

Zeon said that the concept of journalistic crime was being used in France to prevent criticism of the forces ruling the country, adding that the issue of Jewish genocide was still considered a taboo in France.

Twelve people, including the editor of Charlie Hebdo and some of France’s best-known cartoonists were killed when two masked men later identified as Kouachi brothers Said and Cherif attacked the magazine’s offices.

According to Zion, some cartoons contributed to dialogue, while some like the Muhammad cartoons published by Charlie Hebdo were only drawn to insult. “They are aware that they offend a lot of people when they draw the Prophet (Muhammad),” he said.

About his own drawing that was labeled as anti-Semitic by some Jewish groups, he said, it was not anti-Semitic, but anti-Zionist, calling anti-Semitism in France as “a concept made up by Zionists.”

He went on to speculate that France, Israel and the U.S. could be behind the Charlie Hebdo attacks.  He questioned the ease with which the terrorists wandered around Paris “freely” after the attack despite surveillance cameras and alleged that French intelligence knew about the attackers.

He also said that Israel benefitted most from the Charlie Hebdo attacks. He likened Israeli premier Benjamin Netanyahu’s visit to France after the attacks to a funeral ceremony organized by a mafia boss for his biggest enemy.

Zeon said that he, along with a group of other French cartoonists, would publish this week a work titled “I am not Charlie, and I don’t care,” hoping to approach the whole topic from a humorous standpoint.

“Our goal is to make it a balancing weight against the magazine (Charlie Hebdo),” he said.

The tagline “Je Suis Charlie or I am Charlie” had spread worldwide, mere hours after the attack that became a rallying cry of all who wished to mourn the victims and support freedom of the press and expression.

2 charged in death of Missouri man entombed in concrete