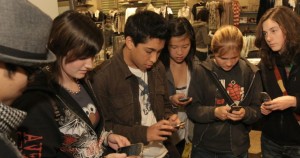 (AA) – Confirming what many people have felt for years, a new Pew Research Center study published Thursday finds 73 percent of American teens own a smartphone.

In its new report on teens and the Internet, Pew finds 88 percent of teens aged 13 to 17 have access to a smartphone. The study’s authors made the designation because defining who owns a device is often difficult in families where smartphones and computers are shared.

Proving that the flip phones of yesteryear are not dead, Pew found almost a third of teens own a “basic” cell phone. More than 20 percent of teens who own smartphones also have a basic cell phone.

Only 12 percent of teens reported they didn’t own a cell phone of any kind.

Because of their easy access to smartphones, Pew found that 24 percent of teens go online “almost constantly,” while 92 percent said they go online at least once a day.

In terms of social media, 71 percent of teens said they use Facebook – evidence against the widespread criticism that youngsters are avoiding the site. In fact, 41 percent of teens claimed Facebook was the social platform that they used most often. More than half, 52 percent, claimed they used Instagram, also owned by Facebook.

Snapchat was next popular, with 41 percent of teens using the platform. Twitter, often widely believed to be the realm of teenagers, actually ranked fourth, with only 33 percent. Twitter even tied with Google+, the tech giant’s infamous social media experiment.

But most teens blend their social experience, with more than 70 percent responding that they use more than one social media site.