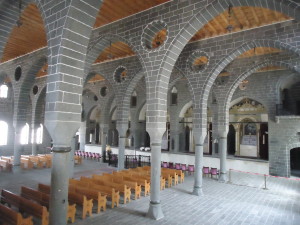 (AA) – The Armenian Church of Surp Giragos in Turkey’s southeastern Diyarbakir province was awarded the Prize for Cultural Heritage by the European Union.

“This church should be known all around the world,” head of the Surp Giragos Church Foundation, Ergun Ayik, told The Anadolu Agency on Wednesday.

Ergun Ayik noted that the award was prestigious not only for the church and the region, but also for the whole country.

He stated that he was pleased with the fact that the church was saved from destruction and added that six years ago, no one believed the restoration of the church would take place.

“Armenians from the U.S., Canada, France, Germany and the Netherlands come here to visit the church,” said Ayik, adding that the complex contributed to boosting tourism in the province.

The ceremony for the European Union Cultural Heritage Awards will be held on June 11 in Oslo.