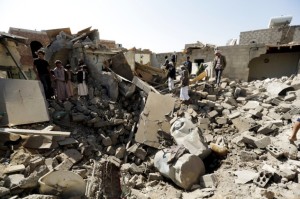 The offensive was said to be an effort to contain the spread of the Houthi fighters in the region, who overran the Yemeni capital of Sanaa on Sept. 21, 2014, and seized key parts of the country.

The coalition announced the end of the operation after nearly a month of airstrikes, saying that the campaign’s main objectives had been achieved.

While it remains to be seen whether Yemeni President Abd Rabbuh Mansour Hadi will return to his country, what steps the Houthis take next will be closely watched.

Although it is said to be officially over, two hours after the announcement about the end of the operation was made, coalition warplanes struck an alleged military base in Daka Hemdan region in the north of the Yemeni capital.

On March 25, Saudi Arabia and several Arab allies launched the military offensive against the positions of Houthi militants across Yemen.

“The Operation Decisive Storm” gave the impression that all Gulf countries had participated; however, one notable exception was Oman, which chose to stay out. Sudan, Egypt, Morocco, Jordan, Kuwait, United Arab Emirates, Qatar and Bahrain took part in the operation that lasted for 27 days.

The Houthis, for their part, have decried the offensive as unwarranted “Saudi-American aggression.”

The coalition aircraft launched the airstrikes in Sanaa and the other cities where the Houthis and their sympathizers were expected to be in the majority. The coalition claimed taking out 95 to 98 percent of Houthis’ air defense capacity along with 80 percent of their arms depots.

Arms depots that reportedly included Scud missiles were hit in Sanaa. The weapons dumps and military camps were run by Houthis and forces loyal to ousted Yemeni President Ali Abdullah Saleh. Saleh is said to have started backing Houthis following the revolts that targeted him in 2011.

Various groups believe the intervention of the Houthis into Yemen’s transition process and policy was in fact Saleh’s “revenge.”

The Saudi led coalition has said that the next step is “Operation Restoring Hope.” According to Saudi Arabia’s official news agency: “In line with the UN Security Council’s Resolution 2216, attempt of the Gulf Cooperation Council and results of the Yemeni National Dialogue Conference, a political effort will be swiftly launched with the aim of protecting civilians, fighting terrorism, evacuating foreigners in the country, providing humanitarian assistances to the damaged regions, halting advance of the (Houthi) Ansarullah movement and preventing arms assistance to forces loyal to Saleh.”

Saleh, a member of the Sanhan tribe, was born in Bait el-Ahmar town in 1942. He was elected president and chief commander of the Yemen’s armed forces by the Yemeni parliament on July 17, 1978.

Saleh initially struggled for a republican government that was supported by Egypt in the face of monarchy, backed by Saudis, in the civil war between 1990 and 1994.

By winning the elections held in 1982 and 1988, Saleh led the unification of the Yemen Arab Republic (North Yemen) and communist People’s Democratic Republic of Yemen (South Yemen) in 1990.

Yemen, which supported Iraq during the First Gulf War, paid a heavy economic cost. Saudi Arabia deported over one million Yemeni workers and the U.S. imposed an arms embargo on Yemen.

Yemen’s former president Saleh, during his visit to Washington in 2007, had allowed CIA drones to target al-Qaeda camps in his country, which resulted in improved bilateral relations and economic assistance.

After the “February 11 Yemen Revolution” within the “Arab Spring” of 2011, Saleh was forced to transfer his authority to his deputy to the incumbent president Hadi on June 4, 2011 and thus the 33-year Saleh regime came to an end in Yemen.

Hadi, appointed as vice-president on Oct. 3, 1994, became the acting president when Saleh underwent medical treatment in Saudi Arabia following an attack on the presidential palace on June 3, 2011.

Hadi had been supported by the UN and the Gulf Cooperation Council to manage the transition period in the country and took the office of presidency on Feb. 25 after running as the sole candidate in the presidential elections on Feb. 21, 2012.

Following the storming of the presidential palace by Houthi fighters, Hadi announced his resignation on grounds that “the country cannot be governed anymore” on Jan. 25, 2015; he later fled to Aden on Feb. 21. Hadi then declared he was still the legitimate president of the country and began talks with different countries in a bid to seek support; some countries agreed to move their embassies to Aden.

Hadi went to a self-imposed exile in the Saudi Arabian capital of Riyadh after the Houthis reached Aden.

The Saudi-led operation sought assistance from the international community and in response, the logistics and intelligence assistance was provided by the U.S., which was a driving power in the military campaign.

Reconciliation efforts by Jamal bin Omar, the UN’s special envoy to Yemen, failed many times since 2011 and the intervention of the Houthis into the country’s policy foiled the UN attempt.

The envoy carried out mediation meetings between the Houthi fighters and Hadi, and retreated from Yemen after failing to get any results to prevent the military operation.

Turkey was the other country that applied shuttle diplomacy and sought reconciliation.

During his visit to Iran on April 7, Turkish President Recep Tayyip Erdogan announced Turkey would act with Tehran to mediate between parties and to reach a cease-fire in Yemen, which would highlight a political and diplomatic solution rather than a military one.

In a press conference held with Iranian President Hassan Rouhani, Erdogan said: “I don’t make any discrimination. Shia people died, Sunni people died. For me, there are only human beings — Muslims — dying there. We must stop bleeding by bringing all fighting sides around a table.”

Pakistan also voiced support for a diplomatic solution. In a phone call, Erdogan and his Pakistani counterpart Nawaz Sharif agreed to intensify their peace efforts in Yemen.

The draft prepared by the coalition countries and submitted to the UN Security Council by Jordan turned into UN Resolution 2216 with the support of 14 countries and abstaining of Russia on April 14.

The resolution required Houthis to immediately and unconditionally end violence, retreat from the regions they had taken under control, return the military equipment they seized and release the political detainees and child soldiers.

It also called for evacuation of foreign citizens, aid workers and diplomats as well as a coordinated break in clashes between the parties in a bid to reach humanitarian assistance.

The resolution banned provision, sales and transferring of arms directly or indirectly to the ousted President Saleh’s son, Ahmad Ali Saleh and Abdul Maliq al-Houthi, one of the leaders of the Houthi movement, who also faced an embargo. The Security Council gave 10 days for the application of the resolution.

The same statements were also uttered at a pro-Houthi al-Masire television channel. Some Houthi leaders said the operation failed to break their Ansarullah movement’s power and claimed their “victory” despite all efforts by the Gulf countries.

Presence of the Houthis in Sanaa, Taiz, Hudeybiye, Ibb and Aden and the clashes in these cities are expected to decide the fate of the “Operation Restoring Hope,” the second phase announced by Saudi Arabia.

If the Houthi fighters withdraw from Sanaa and other cities, and peace is restored by the government following the arrival of Hadi back into Yemen, this second phase is expected to advance within the framework of “policy and diplomacy.”

However, if the clashes in Aden and the advance of the Houthis do not come to an end, the military steps of the “Operation Restoring Hope” are expected to be taken. While there is no a statement from the Houthi fighters regarding retreating or laying down of arms, the developments in the following days will be decisive.