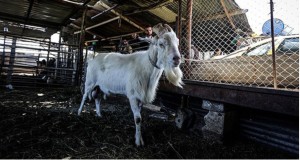 (AA) – The Gaza Strip’s Agriculture Ministry on Thursday put down a milk-producing male goat that had led to an outcry in the Palestinian territory.

The goat’s owner, Jasser Abu Saeed, said the goat had been put down so as to end to the debate it had stirred across the Gaza Strip.

He added that someone had purchased the dead goat’s body for $680 after it was put down.

“Tests done on the goat’s milk showed it to be suitable for human consumption,” Abu Saeed told The Anadolu Agency.

In recent days, Gazans had lined up to buy the male goat’s milk, believing it might cure them of maladies – such as impotence or skin disease – or work against magic spells.

“The ministry accused me of ‘stirring controversy’ and selling the goat’s milk on the pretense that it cures all ailments,” Abu Saeed told AA earlier this week.

The Agriculture Ministry, for its part, said it had decided to put the goat down in order to avoid “stirring confusion.”