(AA) – An exhibition on Turkey’s first star architect Mimar Sinan, who shaped Ottoman Empire architecture in the 16th century, opened on Friday in Istanbul to mark the 427th anniversary of his death.

Organized by the Istanbul-based Mimar Sinan Research Center and the Allevents company, the exhibition at Tophane-i Amire Culture and Arts Center, tells the story of the architect and his works with 3-D animation techniques and digital maps.

Mimar Sinan, who worked as a chief architect and civil engineer of the Ottoman Empire, is described as “the greatest architect of the classical period of Ottoman architecture.”

During his lifetime, he built over 350 masterpieces including mosques, masjids (places of worship), water canals, bridges, palaces and Turkish baths. His creations can be found outside of Turkey, in cities like Sarajevo, Mecca and Medina.

The eight-section exhibition showcases pictures of his works, his building models and drawings with the focus on Sinan’s masterpieces and his architectural style.

“Our aim is to make people better understand him through this exhibition and to make them visit his real works in Istanbul,” professor Demet Kiran, head of the Faculty of Architecture in the Istanbul-based Mimar Sinan Fine Arts University, told press members.

Kiran also stated that they aimed to increase his international recognition, adding he is not known enough across the globe, in spite of his masterpieces around the world. “We could not tell people the world architecture history without Mimar Sinan.”

Mimar Sinan has been compared by some to the 16th century Italian architect and painter Michelangelo.

“Istanbul attains its real silhouette with Sinan’s works. If you remove his works in Istanbul, nothing remains,” Turkish architect and engineer Cengiz Bektas told The Anadolu Agency after the press conference.

“The most significant feature of Mimar Sinan is to choose people as a guide in his works,” he said. “And, he always attached importance to the city’s design with his big and small works.”

A documentary called “5 Centuries Later 4 Seasons in Istanbul from Sinan’s Minarets” is also shown in the exhibition. Sponsored by Turkish Airlines and Sony, the 16-minute documentary tells the story of Istanbul through four seasons.

It will then be on display in other provinces of Turkey such as  Kayseri, Ankara, Eskisehir and Izmir. It is also expected to travel to cities in Europe, in the U.S., the Middle East and the Far East in 2016.

Philippines inflation slows to near two-year low in June 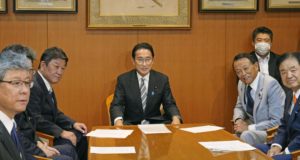