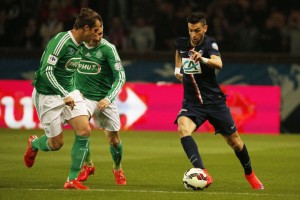 The Parisians were led by a motivated Zlatan Ibrahimovic, who scored a hat trick, and an inspired Javier Pastore who delivered an assist to his Argentine teammate Ezequiel Lavezzi.

Paris took the lead in the first half thanks to converted penalty by Ibrahimovic in the 21st minute, making it the Swedish striker’s 100th goal for PSG. Four minutes later, Saint-Etienne tied the game when Romain Hamouma headed the ball in.

Dominating the game in second half, PSG took the lead with Lavezzi’s header in the 60th minute. They never looked back.

Ibrahimovic sealed the victory with two goals in the final 10 minutes of play, toying with the Saint-Etienne goalkeeper for the first in the 81st minute, and scoring off a powerful strike for the second in the 92nd.

Saint-Etienne’s Turkish international Mevlut Erdinc played all 90 minutes but missed a golden opportunity to score a goal when the game was still up for grabs.

French top division Ligue 1 title contenders PSG will meet lower division team Auxerre in the final, which kicks off May 30.

Auxerre toppled Guingamp 1-0 in the Cup’s first semifinal on Tuesday.