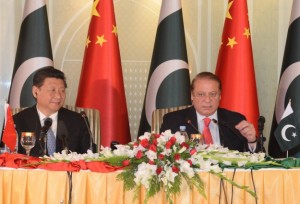 Xi signed a set of energy agreements almost immediately after landing in Islamabad for his two-day trip and later emphasized China’s desire to aid Pakistan in tackling its security problems.

The long-awaited trip has been aimed at solidifying the longstanding partnership between the two countries which has apparently gained in importance since another important ally for Pakistan, the United States, recently began expanding relations with its rival India.

The Chinese president said the two countries would work to formulate a joint counter-terrorism strategy.

The two sides also agreed to increase cooperation in efforts to promote reconciliation in neighboring Afghanistan.

“We have agreed to increase coordination, and cooperation for peace in Afghanistan, which is essential for peace and stability in the region,” Xi  said.

China’s interest in security in Pakistan, as well as neighboring Afghanistan, appears to have increased recently as it seeks to ensure safety for its infrastructure investments.

Alleged Uighur militants from China’s strategically-important northwestern Xinxiang province are also reported to be hiding in the border regions between Pakistan and Afghanistan, with the protection of the Taliban.

The first day of the visit saw the signing of more than 50 agreements and memorandums of understanding, believed to be worth more than $46 billion, on energy, trade, defense, security and infrastructure.

The majority of the agreements were related to the planned Pakistan-China Economic Corridor, which aims to connect China’s Xinxiang province to Pakistan’s southwestern Gawadar port through a network of roads, railways and pipelines to transport cargo, oil and gas.

“We want to convert relations with Pakistan into a strategic partnership,” The Chinese president said, vowing to take Sino-Pak relations to “new heights.”

Welcoming the Chinese president, Sharif said the economic corridor project would turn Pakistan into a regional hub for trade and business while also giving China much-needed access to markets in Central Asia, the Middle East and Africa.

“We look forward to having an all-weather strategic and economic partnership with China,” said Sharif.

Pakistan earlier in April announced it would buy eight Yuan-class type 041 diesel submarines from China to “address force imbalance” with its arch-rival India.

Pakistan’s national assembly was told by defense ministry officials that France had refused to sell submarines to Islamabad as India was buying the same submarines.

“China is towing a proactive policy vis-a-vis its maritime interests in the Indian Ocean, which are threatened by a growing U.S.-India security cooperation,” Kamal Hyder, an Islamabad-based security analyst and journalist, told The Anadolu Agency.

The Chinese president also held a separate meeting with Pakistan’s army chief Raheel Sharif and the heads of the navy and air force.

India has become increasingly keen to gain influence in the Indian Ocean, with Indian Prime Minister Narendra Modi last month visiting the island nations of the Seychelles, Mauritius and Sri Lanka, who all have close relations with China.

Indian navy chief Admiral RK Dhowan said on Monday that India was monitoring the outcome of talks between China and Pakistan.

“We continuously monitor the threat perception, whether it is Pakistan or China,” he told reporters.

“There is nothing to be apprehensive about the Chinese President’s visit to Pakistan. Both the countries have an old relationship. In fact, the good thing is that China has decoupled India from Pakistan. China looks at both the countries independent of each other,” Akbar said.

“The only concern for us is that China should not work on anything which is inimical to Indian interests through military means or by way of endorsing safe terrorist sanctuaries in Pakistan,” he said. “In fact, the extremist forces within Pakistan pose a threat to Chinese interests in the region.”

Retired professor and political analyst Mustafa Khan said that China will keep leaning towards Pakistan because it remains an old and trusted ally in South Asia.

“China and Pakistan share a strategic partnership and the visit by the Chinese president will immensely help Pakistan in defence and infrastructure projects,” Khan said.

“China recognizes India as an emerging power in South Asia. China is naturally attracted to the pro-business government of Prime Minister Narendra Modi because of the huge Indian economy,” Khan said, adding that China’s relations with Pakistan are only based on its interests, and it is increasingly keen to cooperate with India.

Aguero on target as City ease into League Cup final