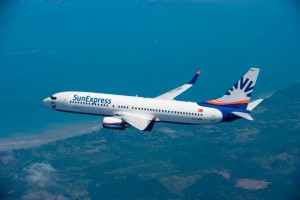 (AA) – Turkey’s SunExpress Airlines will begin flights to Rome and Milan from Izmir on the Aegean coast from Friday, the company has announced.

SunExpress, a Turkish Airlines and Lufthansa joint venture, said the flights would reduce flight times between Izmir and the Italian cities by two hours by removing the need to transfer.

The flights will initially be scheduled on Mondays and Fridays, the airline’s Communication Director Christina Meier told a press conference in Rome on Tuesday.

“We have 43 flight points in Europe,” she said. “There are new markets now. We are proud because Italy is among those markets.” SunExpress flew to 110 destinations last year.