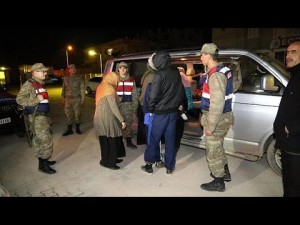 On Monday night, another British citizen Waheed Ahmed, 21, the son of a British Labour councillor, was deported via a flight from Turkey’s Dalaman Airport in the southwestern province of Mugla.

On April 1, Turkish authorities had caught Ahmed and eight other British citizens, including four children, in Turkey’s southern provinces of Hatay and Gaziantep.

Maboob Yasin, 23, Habib Yasin, 25, Zareeda Bi, 48, Samia Bi, 23, and the children had arrived in Turkey from Manchester Airport on March 27, while Ahmed came from Birmingham Airport on March 30, officials said.

Meanwhile, Manchester police said a 21-year-old man was arrested at Birmingham Airport on Tuesday on suspicion of preparing to instigate “acts of terrorism”.

Thousands of foreign fighters from all over the world are believed to have joined terrorist organizations, including Daesh, in Syria and Iraq.