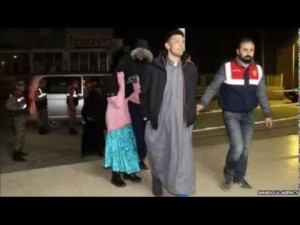 (AA) – A British Labour councilor’s son caught while allegedly trying to illegally enter Syria from Turkey to join militant groups was deported on Monday to the U.K.

On April 1, Turkish authorities had caught Waheed A., 21, and eight other British citizens, including four children, while allegedly trying to illegally enter Syria from Turkey’s southern Hatay province to join militant groups, including Daesh.

Waheed A. was deported to Birmingham from Turkey’s Dalaman Airport in the southwestern province of Mugla, where he was sent to after official procedures had been completed in the Foreigners Branch of the Hatay province police department.

Thousands of foreign fighters from all over the world are believed to have joined terrorist organizations, including Daesh, in Syria and Iraq.

Lawsuits by Michael Jackson accusers likely to be restored