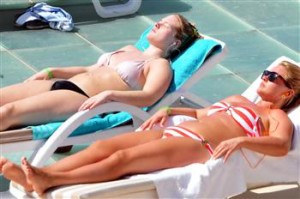 (AA) – Turkey’s revenue from tourism was at $4.87 billion in the first quarter of 2015,  the Turkish Statistical Institute said in a report on its website on Thursday.

Revenue improved 1.3 percent from the same period in the previous year to $4.87 billion.

Turkey welcomed more than 5.3 million visitors in the first quarter of this year, an increase of 5.5 percent from the same quarter in 2014.

Income from tourism is a valuable source of foreign currency for the country as a large current account deficit makes the economy vulnerable to external shocks.

The average expenditure of the foreign visitors was $884 per capita, while it was $994 per capita for the visitors who are Turkish citizens resident abroad.

Turkey ranked sixth among the world’s top destinations in terms of tourist numbers in 2013, according to the World Tourism Organization

Spain returns 6,600 to Morocco, families look for loved ones