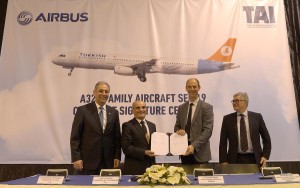 (AA) – Airbus has awarded Turkish Aerospace Industries a new contract to supply its A320 aircraft with fuselage panels, the Turkish company announced Wednesday.

Turkish Aerospace Industries has been the sole supplier for the Section 18 fuselage panels for the A320 since 2014. The new contract signed on Wednesday gives the Turkish company responsibility to manufacture another section of the Airbus A320 aircraft called Section 19.

Sections 18 and 19 are significant portions of the fuselage of Airbus A320 aircraft. According to a statement, the Turkish company also delivered Wednesday composite rudders for the A330 long-range commercial jets. The company’s Hall 4 E75, a section of the aircraft’s wings, is going serve as a single-source supplier through the life of the A330.

“TAI’s workmanship quality, competitive prices and timely delivery performance paved the way for enhancing our relationship as well as growing our presence in the Turkish industry with our modern aircraft family,” Klaus Richter, Chief Procurement Officer for the Airbus Group and Airbus, said.

“When we look at the overall Airbus and TAI relationship, we also have to underline the work TAI performs for the A400M and A350 XWB. Both programs are on the serial ramp up phase and deliveries are performed as per schedule,” Richter added.

“All of these activities demonstrate the fact that Airbus and TAI relationship is beyond a simple supplier customer relationship,” Muharrem Dortkasli, TAI chief executive officer, said. “It is rather a strategic partnership which carries potential to grow even further,” Dortkasli said.

Turkish Aerospace Industries turnover with Airbus stood at $10 million in 2005 and it is expected to reach $175 million this year, according to Dortkasli.

Myanmar not ready for return of Rohingya Muslims, says UNHCR