(AA) – The Turkish lira dipped to a new low against the greenback on Wednesday.

Starting the day at 2.6879 per dollar, the Turkish lira slumped to 2.7048 before noon Wednesday as the U.S. dollar index, which measures the greenback against a basket of six major currencies, inched over 99 points, just one point shy of its all-time high.

On Tuesday, the slide in value of the Turkish lira against the U.S. dollar ceased early in the afternoon as Turkey’s central bank hinted at possible rate cuts for foreign exchange deposits.

In a statement on its website, the bank said its monetary policy committee would also consider a measured hike in the partial remuneration rate on Turkish lira reserve requirements.

Experts believe that the dollar’s strength was the major driver behind the decline of the Turkish lira, as well as other currencies from emerging markets, as the latest data has indicated large-scale dollar demand across the world.

Some analysts also point to heightened anxiety in Turkish markets due to the upcoming general elections in June and subsequent concerns over political stability.

May to speak to EU leaders this week over Brexit 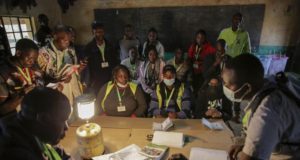