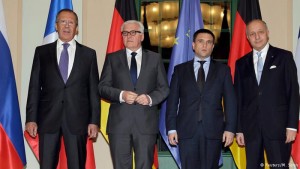 (AA) – The foreign ministers of Russia, Ukraine, France and Germany gathered at a mini-summit in Berlin on Monday evening to discuss details of a process toward a political solution to the crisis in eastern Ukraine.

German Foreign Minister Frank-Walter Steinmeier called on the conflict’s parties to fully adhere to the ceasefire in all locations and prepare the ground for a political solution, ahead of the four-party talks in Villa Borsig, the guest house of the German Foreign Ministry.

“It has been eight weeks since the agreement on the Minsk ceasefire deal,” Steinmeier said. “Without doubt, the situation has calmed down in eastern Ukraine, but it is still too early to give the all-clear.”

He expressed regret for the recent clashes around Donetsk Airport and the eastern town of Shyrokyne.

Steinmeier said the foreign ministers of the four countries would discuss ways to contribute to the de-escalation in conflict areas.

“The Minsk agreement is not just about a ceasefire. It is also about initiating a political process,” Steinmeier added.

He said that the ministers will discuss details of the political process, including preparations for elections in eastern Ukraine, but underlined that to make progress on these topics, it was necessary to maintain security in the region.

The Minsk ceasefire agreement of Feb. 12 foresees the withdrawal of heavy weaponry from combat areas, the withdrawal of all foreign-armed formations and the release of all hostages and unlawfully detained persons, as well as political reforms and decentralization in the eastern Ukrainian regions.

The Organization for Security and Cooperation in Europe, which monitors the ceasefire in eastern Ukraine, has suggested on Wednesday setting up working groups on security, political, economic and humanitarian issues, in order to achieve progress in implementing the agreement.

More than 6,000 people have lost their lives in the conflict between Ukrainian forces and pro-Russian separatists since April 2014, according to the United Nations.