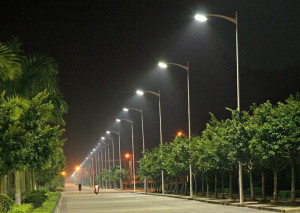 (AA) – The local authorities in Zimbabwean capital Harare have resorted to using solar power to light the city’s streets with the hope of curbing surging robberies.

“We are starting with the central business district; then we will move on to other parts of the city,” Micheal Chideme, the Harare City Council’s media officer, told The Anadolu Agency.

Councilor Herbert Gomba, chairperson of the council’s procurement committee, said installation of the streetlights, which began recently, is expected to wrap up sometime in 2016.

The $15-million project is being carried out in partnership with a Zambian advertising agency, which will erect three-meter poles around the city bearing small solar panels and a battery at the top.

Batteries will last between ten and 12 hours. They will be equipped with timers that will automatically switch on at 6pm and off at 06am.

“Following the installation of the solar streetlights, the Harare City Council is expected to save nearly $200,000 every month,” Chideme said.

“This is the [amount of] money the Zimbabwean capital has been paying to the power utility for electricity,” he explained.

The use of solar energy will see the streets of Harare lit up for the first time after years of neglect due to funding shortfalls.

Harare is known as the “Sunshine City” due to the solar energy that is available there in abundance.

The “Vision 2025” initiative, launched in 2012, aims to turn Harare into a world-class city over the next ten years, including the installation of state-of-the-art infrastructure.

The erratic power supply has thrown many Zimbabwean cities into frequent darkness.

So far, Zimbabwe’s sole power provider, the Zimbabwe Electricity Supply Authority, is only managing to provide half of the country’s power needs.

It generates at least 900 megawatts, compared with a national demand of 2,200 megawatts daily.

The country currently imports power from both the Democratic Republic of Congo and neighboring Mozambique.

At the moment, the country relies on thermal and hydro-electricity, generated at the Hwange Thermal Power Station and Kariba respectively.

Hwange is situated a few kilometers from Victoria Falls and uses coal from the Hwange coal mine. The Kariba power station, meanwhile, is on the Kariba Dam wall, west of the capital.

“All this is aimed at reducing robberies, which have become a menace in the Zimbabwe capital,” Chideme told AA.

The lack of street lighting has in recent years resulted in hundreds of people falling prey to thieves and robbers. Numerous people have lost their lives and property.

“It’s a good deal, considering crime was increasing and that the Harare City Council had completely failed to repair the streetlights,” Innocent Mpofu, a 29-year-old resident of the capital, told AA.

Spencer Banda, another resident, gave the new arrangement a thumbs-up.

“Crime has been increasing in Harare because of darkness, so if they are able to secure the solar panel and batteries, this will be very helpful,” 34-year-old Banda told AA.

Questions, however, have been already raised as to why a foreign company had to be contracted to carry out the project.

Under the 15-year deal, the Zambian company will install 4,000 solar-powered streetlights, and, in return, retain 85 percent of advertising rights on all the lighting poles.

“Advertising on the smallest billboard in Harare costs approximately $700 per month,” noted Nyasha Hove, an independent advertising agent based in Harare.

Harare City authorities, for their part, were quick to defend the deal.

“The project is being carried out as an investment, without the city paying a cent,” Chideme told AA. “The cash crunch affecting the Zimbabwean economy was considered as well.”

“We have decided to allow the Zambian company to install the solar lighting because they are the ones who approached us with the idea,” he told AA.

“With the cash crunch currently affecting our economy, most companies will have asked for payment – hence the decision to take on board a foreign company with financial muscle,” Gomba contended.

Mother believes US veteran held in Iran has cancer

26 killed as small plane crashes into homes in Congo

It’s time for Trump’s doctor to be examined, for VA chief