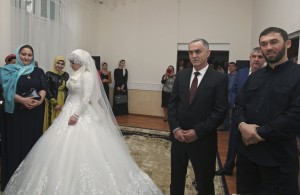 The groom is approaching 50, a silver-haired boss in the Chechen strongman’s feared police force. The bride is 17, a shy beauty reportedly devastated at the idea of wedding a man nearly three times her age.

Many Russians expressed outrage over the nuptials, causing a firestorm in the media and putting Chechen leader Ramzan Kadyrov — a close ally of Russian President Vladimir Putin — on the defensive. The wedding went forward over the weekend anyway, the bride deathly pale and her voice barely audible as she agreed to marry Nazhud Guchigov, who reportedly was taking her as his second wife as allowed by Islamic, but not Russian, law.

Kadyrov’s chief of staff played the best man, clutching the bride by the elbow to control her every step, and Kadyrov himself danced a folk dance at the wedding reception.

The scandal comes amid a tug-of-war between Kadyrov and Russian federal law enforcement, which escalated after the slaying of charismatic Russian opposition leader Boris Nemtsov. Kadyrov’s defiance in shielding Chechen suspects in the killing has aggravated longstanding tensions between him and Russian security agencies. That creates a headache for Putin, left with the delicate task of moderating the conflict to avoid destabilizing the region.

The tensions are unlikely to spark open hostilities or lead to Kadyrov’s removal. But they reflect an apparent effort by the Kremlin to cut the 38-year-old Chechen leader down to size and make him obey the rules — even as Putin continues to stand by Kadyrov.

Kadyrov has enjoyed an exclusive relationship with Putin, who saw him as the linchpin for peace in Chechnya after two devastating separatist wars that killed tens of thousands. In exchange for restoring stability, Putin gave Kadyrov, a former rebel, carte blanche to run the region in the North Caucasus as his personal fiefdom and funded a costly reconstruction.

The relationship goes beyond Realpolitik. Putin, a macho judo master, and Kadyrov, a gruff red-head with a penchant for boxing, have developed a close personal relationship. Kadyrov has issued a stream of adulatory statements, calling himself Putin’s “foot soldier” and launching diatribes at the West and Putin’s domestic opponents. And with Kadyrov’s apparent blessing, Chechens have poured into eastern Ukraine to fight alongside pro-Russian rebels.

Putin’s patronage has allowed Kadyrov to effectively shed federal controls. He makes it clear he listens to the president and nobody else. And he has imposed some Islamic rules, overruling federal law, allowing men in Chechnya to take several wives and introducing a tight dress code for women.

Lavish reconstruction projects along with Kadyrov’s promotion of Islamic law and his rejection of federal controls have helped swell his popularity, enhancing stability. The Kremlin, in turn, has sheltered the Chechen leader from criticism over killings, abductions, torture and other abuses by his feared security forces.

Federal police and security services have been all but invisible in Chechnya, unable to make a move without Kadyrov’s permission. That has worried many, who say the much-touted order in Chechnya hinges on the Putin-Kadyrov relationship and could be upset quickly if it falls apart.

Kadyrov’s protective shield started to crack after Nemtsov was gunned down on Feb. 27 just outside the Kremlin, and federal investigators quickly tracked down and arrested five alleged perpetrators, all Chechen. The suspected triggerman was an officer in Kadyrov’s police force.

The top brass in Russian law-enforcement agencies, who have always detested the Chechen leader, saw Nemtsov’s killing as an opportunity to settle scores. But Putin, while calling the slaying a “disgrace” for Russia, awarded Kadyrov with a medal underlining his support.

The Chechen leader was at first openly defiant, praising the suspected triggerman as a good patriot and a deeply religious man. When federal investigators tried to get to another key suspect, a senior officer in the Chechen police force, they were unable to interrogate him in Chechnya, where he enjoyed police protection.

Despite the setback, federal law enforcers kept up the pressure. In April, police in southern Russia made a surprise foray into Chechnya to nab a suspect in a separate criminal case, and shot the man dead when he resisted arrest.

A day later, a furious Kadyrov ordered his forces to shoot to kill any police from outside the region if they dared to venture into Chechnya. With the brash statement, Kadyrov sought to burnish his credentials as a ruler on par with Putin and above federal law.

He may have hoped that Putin would side with him once again. But Kadyrov miscalculated. While Putin did not publicly comment, his spokesman said in a steely statement that Chechen police should unconditionally obey federal authority.

Realizing his blunder, Kadyrov quickly backed off and offered new pledges of loyalty, saying he would step down if ordered to do so. The tensions have abated, but the investigation into Nemtsov’s killing remains deadlocked.

The latest blow to Kadyrov came earlier this month, when a leading independent newspaper reported that the 46-year-old Guchigov was forcing a 17-year-old into becoming his second wife by blocking her village so she couldn’t leave.

Kadyrov stood by the police chief, saying the girl and her family voluntarily agreed to the wedding. The Chechen leader also fired his information minister, accusing him of failing to quash what he described as slanderous reports.

The teenage bride, blushing and looking down, told a news portal controlled by the Kremlin that she faced no intimidation. The Russian children’s rights ombudsman also said he looked into the case and found no violations.

The wedding took place Saturday in Chechnya’s capital, with the bride looking stiff as she was escorted by Kadyrov’s black-clad chief of staff. The quiet resolution of the scandal signaled that Moscow had decided that Kadyrov had been taught a lesson and there was no need to push things further.

In past years, Kadyrov’s men have operated with impunity not just in Chechnya but also on the streets of Moscow. In 2008, one of Kadyrov’s most prominent foes was shot dead just outside Russian government headquarters. Several Chechens were convicted of perpetrating the attack, but the organizers have never been found. Two years earlier, another Kadyrov rival with ties to federal security was shot and killed in central Moscow.

Russian media reported that Chechen businessmen have dramatically expanded their clout in Moscow under Kadyrov, and some members of his feared security forces have been permanently deployed there to help protect Chechen interests and act as musclemen in business disputes. Some reports claimed that Chechens have even challenged the murky economic interests of Russia’s law enforcement agencies, which have considered themselves omnipotent under Putin.

With a multi-pronged attack on Kadyrov, federal law-enforcement chiefs clearly want to reorder the rules of the game and strip Kadyrov of his exclusive status. Putin himself may welcome the idea, sensing that the Chechen strongman was shaking his “vertical of power.”

“I wouldn’t exclude Kadyrov’s dismissal,” Shvedov said, arguing that the Chechen’s purported role as a guarantor of stability may be overestimated, and that a new conflict in Chechnya was unlikely even if he were arrested, because Kadyrov’s men wouldn’t take up arms against Putin.

But others believe that Putin still sees Kadyrov as key to Chechen peace.

Alexei Malashenko, a Chechnya expert with Carnegie Endowment’s Moscow office, said that Kadyrov has reaffirmed his special status by pushing through the wedding despite the media uproar. He said that while tensions between Kadyrov and law enforcement chiefs will likely continue, Putin can be expected to stand by the strongman.

“It makes no sense to replace him,” he said. “It will lead to infighting and instability in Chechnya.”