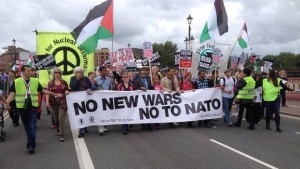 Protesters in Paris have staged an anti-NATO rally demanding withdrawal of the country from the military alliance amid rising skepticism in the nation towards super national institutions, Press TV reports.

The protesters taking part at the Saturday demo believe that the North Atlantic Treaty Organization is doing far more harm than good, while many argue that the alliance brings about a loss of autonomy and increased military spending for the country.

“We want France out of NATO because they have engaged in so many wars all on the pretext of humanitarian intervention or to allegedly increase human rights,” said one of the demonstrators.

Back in 1966, former French President Charles De Gaulle withdrew from NATO arguing it undermined France’s sovereignty. Under ex-president Nicholas Sarkozy, an ardent admirer of the United States, Paris rejoined NATO after over 40 years. Many in France, however, believe that it is not too late to reverse course.

“NATO means that Europe is simply a tool for American imperialism … every year we have one or two declarations of war on the nations in the south. That’s why we want out of NATO,” said another protester.

Recent polls indicate that the French are even more opposed to being in NATO today than they were in 2009, but mainstream politicians such as the Socialist President Francois Hollande show no inclination to re-assess the country’s membership in the alliance.