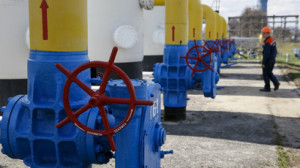 Russia’s Gazprom wants Ukraine’s Naftogaz to pay penalties for taking less than the agreed upon amount of gas in 2014, considering the so-called “take-or-pay” contract signed by the companies.

At the end of 2014 Russia, Ukraine and the EU agreed to put a freeze on the “take-or-pay” principle for five months which means that in the period spanning 1 November 2014 to 31 March 2015, Russia would not impose fines on Ukraine.

Naftogaz has reacted by saying it has never paid penalties arising from the “take-or-pay” rule and does not intend to do it in the future. The Ukrainian company claims the “take or pay” condition is not part of the contract.

At the same time the company welcomes the intention of Gazprom to submit their claims to an arbitration court. “Arbitration is the most civilized way to resolve commercial disputes when the parties cannot find a consensus through negotiations,” said the head of Naftogaz Andrei Kobolev, commenting on the statement of his Russian counterpart Aleksey Miller.

“The corresponding claim will be addressed to Naftogaz of Ukraine today, the same claim will be directed to the Stockholm arbitration,” said Miller, quoted by RIA.

Miller estimated the total debt of Naftogaz to Gazprom at more than $29 billion. He said $200 million are owed to Gazprom for gas deliveries to the Donetsk and the Lugansk regions in Eastern Ukraine.

Earlier Gazprom filed an action to the Stockholm arbitration against Naftogaz, demanding $18.5 billion for the gas volumes in 2012-2013 that weren’t delivered by Gazprom but had to be paid for by Ukraine under the “take-or-pay” agreement.

In April Miller proposed to extend the freezing of “take-or-pay” during a meeting with Russian President Vladimir Putin, who supported the idea, saying that Ukraine’s overcoming the crisis is in Russia’s interest.

“We currently see that the level of Ukraine’s offtake of Russian gas is extremely low. This is connected with the decline in Ukrainian industry, with the increase in energy prices,”said Miller.

The level of deliveries amounted to slightly more than 14 billion cubic meters of gas in 2014, while they agreed to take 41.6 billion under “take-or-pay,” he added.

“Of course the difference is very large, and we believe it’s possible to support the appeal of our Ukrainian colleagues to extend the freeze on the ‘take-or-pay’ principle,” said Miller.

In April Gazprom and Naftogaz signed an additional agreement on gas deliveries in the second quarter, and the Russian government gave Ukraine a discount on gas supplies at the expense of the export duty rate. On May 23 Ukraine asked Gazprom to extend the discount until the end of 2015.Aliide, Today 2:30 PM

Iceland PM to step down after Panama disclosures

Sudan lobbying against Ethiopia over GERD