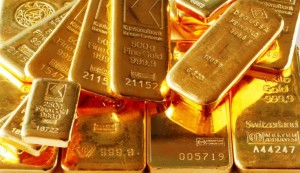 Gold prices are set to rise next week, according to several analysts, as the precious metal has managed to hold above its near-term resistance despite a stronger US dollar.

In a busy week for economic data, analysts will be watching for the yellow metal’s reaction to the ECB interest rate decision on 3 June, the BoE rate decision on 4 June, and US employment data due out on 5 June.

Market watchers will also be tracking developments in China, the world’s top producer and consumer of the metal, where an equities rally has dented the demand for gold.

Meanwhile, of the 512 votes polled in a separate Kitco online survey, 230 participants, or 45%, said they expected higher gold prices next week. As many as 186 were bearish on prices, while 96 were neutral.

Ken Morrison, editor of Morrison on the Markets, Ralph Preston of Heritage West Financial and Colin Cieszynski from CMC Markets, said in their survey responses that gold’s ability to hold support is positive in the short term.

George Gero, senior vice president at RBC Wealth Management, told Kitco that he was slightly bullish on gold next week as the market had already priced in higher interest rates, limiting gold’s downside; and that any increase in wages in 5 June’s US employment report could be seen as positive for gold because it is considered inflationary.

Preston said: “As of this moment it does not appear as if we will be breaking through 1,170 to the down side anytime soon.”

Cieszynski added: “Gold has stabilised just below the middle of its $1,170 to $1,230 channel trading just below $1,200 and has started to bounce back. Weak PMI or employment numbers out of the US could knock [the US dollar] down and boost gold.”

Capital Economics said in a 29 May note: “The lure of a soaring stock market has surely dampened Chinese investors’ demand for gold. Correspondingly, even though we are not predicting an imminent crash, the precious metal should benefit when enthusiasm for Chinese equities does eventually cool.

“Admittedly, developments in the advanced economies, and especially in the US, have recently had a bigger influence on the global price of gold. However, we also continue to expect a boost from an escalation of the crisis in Greece.”

Meanwhile, reports said Austria’s central bank was planning to repatriate £3.5bn of its gold reserves stored in London over the next five years.

The BoE looks after much of the world’s gold as most central banks send some of their stocks to London, given the city’s fame as a major international centre for gold trade. With the biggest bullion market in the world, London attracts buyers from Europe, Asia, Africa and the US.

The Assad regime still exists because Iran is shipping 60,000 barrels of oil to...