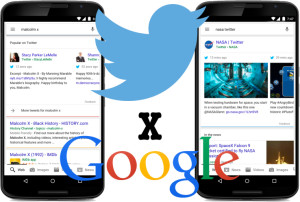 Google has added Tweets to its search results on mobile, via the official Android and iOS Google apps, as well as on mobile browsers. The search results can be triggered by “Twitter” keyword searches for specific accounts and hash tags, but also surface Tweets for any standard search, too.

In its official blog post detailing the news, Google says this is an attempt to put “real-time info” into its results, and notes that it provides Twitter users with a larger audience for their content as well. Indeed, this should be a great relationship for Twitter in terms of broadening its reach and exposing the network to many more potential new users.

On its own blog, Twitter details the arrangement as well, but provides little additional information. Both blog posts note that the integration will begin showing up for Google users in the U.S. with English as their primary language today, with desktop Google.com presence and support for additional countries coming in the next few months.

While the arrangement will definitely put Tweets in front of more eyeballs than they otherwise might have reached, Twitter will still have to convince potential users that it’s a worthwhile destination in and of itself – presence in search results might not make it immediately apparent to your average search user that they exist in a separate, distinct destination.